CruiseTour Choices
Alaska is so vast it spills over into the Canadian Yukon. And your vacation dollar goes further too. Only Holland America cruisetours include top national parks, the historic Trail of ’98, the scenic Alaska Highway and more. If you’re looking for Denali National Park, Kluane National Park and the Trail of ’98 showcasing Mt. McKinley and Klondike gold rush history then a Great Land Klondike CruiseTour is for you. If you want to include Denali National Park, Kluane National Park and the scenic Alaska-Canada Highway, then a Great Land Wilderness CruiseTour would be your choice - this also includes the most economical tours for nature lovers!   Alaska and the Yukon via the Trail of ’98: all the Great Land’s natural wonders from Denali and the Klondike gold rush history of Dawson City to Kluane National Park, the Inside Passage and Glacier Bay. With the White Pass & Yukon Route Railroad, our exclusive Yukon River excursion, and the McKinley Explorer railcars, this is the way to go.  See more of the Alaska-Yukon wilderness via the Al-Can Highway: adventures along the Alaska-Canada Highway scenery highlight the Great Land’s wild, remote wilderness. Exclusive University of Alaska-Fairbanks programs, luxury rail travel to Anchorage, Inside Passage cruising with Glacier Bay and much more await nature lovers.

What someone who has done it has to say about this trip.

Alaska by Land, Not Sea
Cruise Week correspondent Art Sbarsky reports on the land portion of his recent Holland America Cruise/Land Tour trip in Alaska/Canada. The 11-day journey included three nights on Zaandam from Vancouver to Skagway and then rail, catamaran, and motor coach to Anchorage.

I had always thought it was enough to see Alaska from a cruise ship as long as I got an aerial view via an airborne shore excursion, but this trip opened my eyes. Only by getting inland and seeing some of the less developed places do you get to see "unspoiled" Alaska.

About 300 people debarked the ship in Skagway and started their land tours. People who finished their land tours in Skagway got on the ship to replace those who had gotten off. The way Holland has it set up, you can take a three-day cruise as long as it ties into a land portion. The 10-night cruise tour we took was the official land tour #1 in Holland's brochure--about 90 people, or two full busses, took this option.

Dawson City, Canada--One of the key cities of the 1898 gold rush. Here, a shore excursion goes to the gold fields; our guide owns land there and has been actively mining gold for over 25 years. Hearing about life and living there from someone so involved with it made it even more fascinating.

Dawson City is also the jumping off point for excursions to Tombstone Territory, recently developed for tourism by HAL. In 2004, there were less than 2,000 visitors in total to this 2,200 square-mile, boreal-forested park. Options for HAL guests include the Grizzly Lake Hike (strenuous to say the least, but I made it; the guide was an expert), a tour of the area via van with a naturalist guide, and the Chapman Lake Coach Tour that goes to the park's visitor's center.

It was also in Dawson City that the sun set so late and rose so early there was no darkness even in the middle of the night. This phenomenon was to continue for the rest of the trip.

Fairbanks: We visited Gold Dredge #8 for a great miner's stew lunch and tour of the actual gold mining machinery. It may sound hokey, but one gets a great understanding of just what miners were up against in trying to get gold out of the ground. A neat excursion is a flight to Fort Yukon, eight miles over the Arctic Circle, where 500 members of a native clan still live, even though life is quite basic.

Denali: From Fairbanks, it was on to an overnight stop for Denali National Park via HAL's quite luxurious McKinley Explorer railcars. The scenery in Denali, whether seen from the park's bus trip as far in as the road goes or from the vantage point of a helicopter excursion into the glacier- and snow-filled interior of the park, is magnificent. And while the animals one sees are not as close-up as in your local zoo, seeing bears, moose, caribou, Dall's sheep, and more in their natural habitat is amazing.

After Denali, the train goes on to Anchorage where, after one last sun-filled night, the trip came to an end.

Not only was the trip superb in terms of scenery and wildlife, but taking a step backwards and considering the logistics of moving guests all the way around from Skagway to Anchorage in seven nights, staying at six different hotels along the way, what with all
the luggage and such, is pretty amazing. Sitting on coaches and trains much of the way for the land portion may get a little wearying, but mixed in with different shore excursions and other activities, it shouldn't be an issue for most potential clientele. And it's a splendid way of seeing more of this outrageously large state. 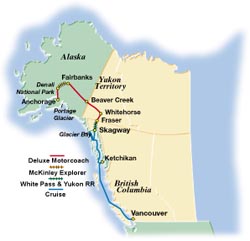 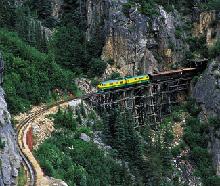 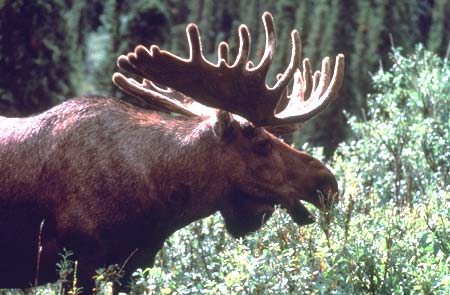 Itinerary may vary slightly by departure. A detailed itinerary will be provided at time of confirmation. 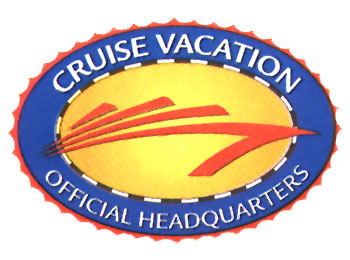